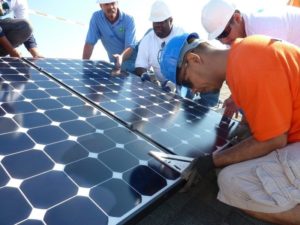 The collapse of solar power firm SunEdison Inc. continued at its devastating pace Monday, with the share price tumbling closer to zero amid reports that the company’s bankruptcy filing was imminent.

Trading for SunEdison shares, already under extreme duress, fell 50 percent Monday to around 20 cents per share. The market cap, which totaled billions of dollars only a year ago, now stood at less than $70 million as shareholders faced the prospect of losing that remaining value if and when SunEdison filed for Chapter 11 bankruptcy protection.

Internal strife and its ill-fated attempt to merge with Vivint Solar lay at the heart of SunEdison’s problems. Last month, Vivint sent its estranged partner a letter saying Vivint had terminated the agreement because SunEdison committed a “willful breach” of the merger deal.

In addition, SunEdison also notified federal regulators in March that it could not deliver its annual financial report because it was still investigating questions about its financial position.

The reason, SunEdison confirmed at the time, was due to “ongoing inquiries and investigations by the audit committee of the company’s board of directors…” In late 2015 the audit committee started an internal probe after former company executives alleged that previously disclosed financial records may be inaccurate.

Then, a situation which couldn’t seem to get worse did so last week, when the U.S. Department of Justice subpoenaed SunEdison “seeking information and documentation relating to… certain financing activities in connection with the Company’s acquisition of Vivint Solar, Inc., the conduct of a former non-executive employee who is alleged to have committed wrongdoing in connection with the Vivint termination negotiations, the previously disclosed investigations by the company’s audit committee, intercompany transactions and other issues.

SunEdison was worth as much as $31 per share on the New York Stock Exchange only nine months ago. The company and Vivint first announced their proposed merger in the summer of 2015.

Stock investors will lose all of the value of their shares if SunEdison files for Chapter 11 protection. Bank creditors and other lienholders will be first in line during the federal bankruptcy process.

Brighter days shone for SunEdison as recently as last summer amidst a building boom in solar power capacity. In addition to the Vivint deal, the ambitious company announced plans to buy Costa Rican renewables firm GME and others.

SunEdison’s total debt to equity ratio is around 832 percent, compared with the industry average of 46 percent, according to Fidelity.com.

Several companies and partners with SunEdison has filed lawsuits against the firm, alleging they were misled about the company’s financial woes.